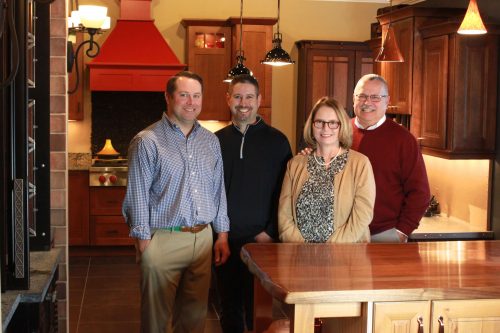 When Paul Ewing founded our company over two decades ago he had a dream that someday the business would be a place his entire family would be proud to work. His dream has come true. All four members of the Ewing family now have a vital role within our company. When asked why he loves our company his answer is clear, “I love it because it’s ours.” This statement speaks to the heart of who Paul is, a hardworking, family-focused man.

Back when The Ewing Companies was first established the initial remodeling projects were for friends and friends-of-friends. Word of mouth spread quickly and before too long our small start-up had become a well-established building, remodeling, and cabinetry company. The Blacksburg community has a family-feel to it, which makes it the natural and right choice for our company’s home. Paul reflects on those early days and describes his decision to venture into the remodeling and cabinet business as a, “brave, perhaps foolish move” but quickly adds how well it has worked out.

Debbie, Paul’s wife, has always been his most enthusiastic fan. She is also an officer of our company, provides administrative support, and is a contributor to some projects during the design phase. Her contributions to design aspects of projects have grown as she has acquired experience alongside Paul. She has witnessed him transform hundreds of spaces with remodeling and cabinetry projects. This acquired experience and skill also compliments her intuitive approach to design, it is a bi-product of her natural affinity for hosting events and entertaining.

Three years after Paul founded our company another family member eagerly joined our ranks. Jason, Paul and Debbie’s youngest son, came on board in 1998 and is now the lead construction supervisor. His background is within construction, which is an essential skill set to have in his role. Jason will tell you he is shy but don’t let him fool you, he is one of the easiest people to be around and is excellent at taking care of our clients. He also works with our craftsmen to coordinate their efforts and ensure project timelines are followed. He is a champion multi-tasker, as he has to balance several projects all at once, all in various stages of build or remodel.

Much to Paul, Debbie, and Jason’s delight, Brad also joined our team in March of 2016. He has always been involved with our business to an extent but it became formal when he joined the team to support the business development and management functions. He is deeply rooted within the New River Valley, as he worked as a PGA Golf Professional at the Blacksburg Country Club for 10 years. His connectivity to the community is something we are thankful for, as we strive to give back to and honor this place we are fortunate to call home.

We know that the tight bond we have as a family-run company is something that sets us apart and gives us strength. Paul has led our company and family well over the years. We have to agree with him, we all love this company, because it’s ours.