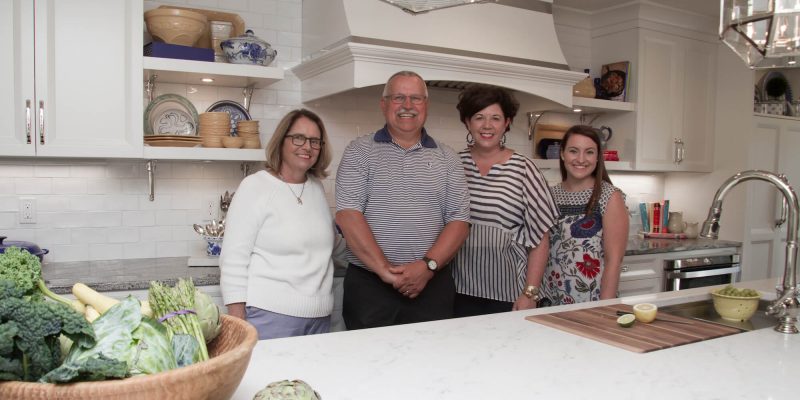 One thing you need to know about Debbie Ewing is that she has been a lifetime cook. Since the age of ten, she has invested a lot of time in the kitchen, baking and preparing food for the friends and family she loves so dearly. Debbie recalled, “My mom let me cook and taught me to do things early. Of my 65 years probably 55 have been cooking.”  Knowing that, it only makes sense that such an avid cook and baker would have big dreams for her kitchen.

When Paul and Debbie first moved in their 1970’s style split level home they knew they would have the opportunity to continuously renovate and improve their space. Interestingly enough, they have never purchased a brand new home, they have always remodeled. They enjoy the transformative process of a remodel and watching a vision shape before their very eyes.

The kitchen has been through three renovations total, nudging them in the direction of this final dream kitchen. The second transformation, which occurred 15 years ago, involved major structural changes to open up the layout and add a sunroom seating area. After that second remodel, the structure of the kitchen and living area was just right, but the flow and function of the space was lacking. Debbie said, “My kitchen was beautiful before it just didn’t fit the need that I have now.” 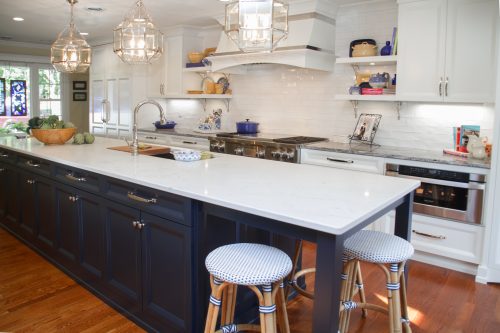 This biggest need Debbie has in the kitchen now relates to the little people in her life; her grandchildren. Debbie wanted to be able to cook and interact with them in the kitchen, enlisting their help in the process.  In fact, she loves to entertain and give a job to each friend and family member, when possible. She turns cooking and baking into an activity that binds friends and family together. Her old layout and the function of the space didn’t support this.

When Debbie began the redesign process she had clear ideas about what she wanted and Paul also contributed to the vision. However, Debbie knew she needed to trust the experts when it came to formally planning for her dream remodel. Debbie turned to a dream team of designers to inform the process, Sara Jones, our designer and Edith-Anne Duncan, a premier interior designer and owner of Designs by Duncan. Paul was able to pull together the input from Sara and Edith-Anne and combine it with the perfect plans. Then,  Jason Ewing served as the project manager and was able to bring the plan to fruition. 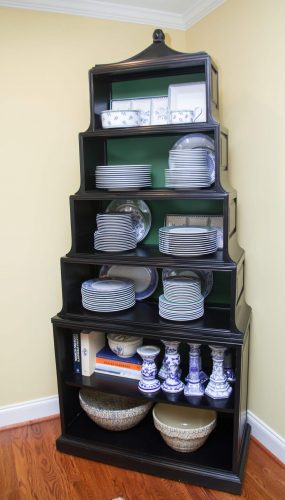 One of the most critical suggestions Sara and Edith-Anne made was to get rid of the peninsula and replace it with a large island, to create a continuous flow within the space. Debbie hesitated; after all, she was very comfortable using the peninsula over the years. However, Debbie also knew she needed to embrace their expertise and allow her vision to be shaped.  Debbie now reflects on that decision and said, “It was the best way to maximize the space and create the flow we wanted.”

The expertise and wisdom shared by Sara and Edith-Anne related to high-level aspects of the remodel and transcended into the smallest of details. Edith-Anne, for example, suggested painting the back of her all-black china hutch the same vibrant green used in the seating area. Not only did this create a cohesive design throughout the space, it made Debbie’s china really pop! Sara helped create custom dividers within Debbie’s kitchen drawers so the intended use is made easier and more organized, like a drawer designed just for recipes and cookbooks.

When you enter the new kitchen you can’t help but be struck by how stunning it is. The kitchen cabinets run all the way to the ceiling and are a crisp white. There are vibrant splashes of yellow, polo blue, and vibrant green throughout—a color scheme selected based off a stained glass decorative piece Debbie loves. The design and décor is smart, cohesive, and very intentional.

Edith-Anne emphasized the need to see the space in the kitchen, dining area, sunroom, and outdoors as cohesive and unified. There is flow and continuity of design in the various rooms and areas in smart and complementary ways. For example, the dining room has a buffet with a countertop that is a matching material to the kitchen countertops. 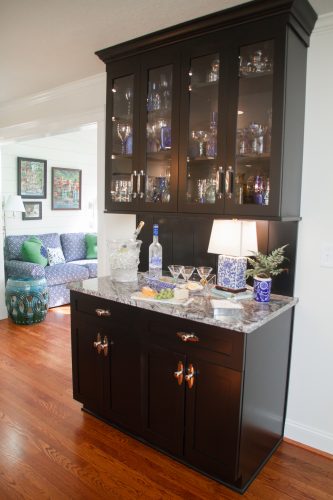 Another aspect of the kitchen that is striking is how clean and spacious it feels. True, part of that is because Debbie runs a tight ship in the kitchen, and keeps it clean. An additional reason relates again to the smart design. The refrigerator is tucked away behind cabinets, creating a smooth visual experience. There is a coffee station tucked away behind cabinets, which is convenient to access but not a consistent fixture on the countertops.

Even seating was intentional to support a open and airy space. Debbie said, “I knew I wanted seating at the end of the island for my granddaughters but I also wanted something that could be tucked away out of the way. Edith-Anne helped me find the perfect stools, they are Serena and Lilly stools.” The value of engaging with a talented and trusted designer manifests itself in the new Ewing kitchen.

The Ewing family kitchen is now a shining example of what happens when talented designers, excellent craftsman, a seasoned remodel team, and a vision come together.  After dreaming for three decades, and various remodel projects, Debbie has a stunning new kitchen with excellent function and flow—at last, her dream has come true.

We invite you to view the full gallery of images for a closer look at the many stunning design and functional features!